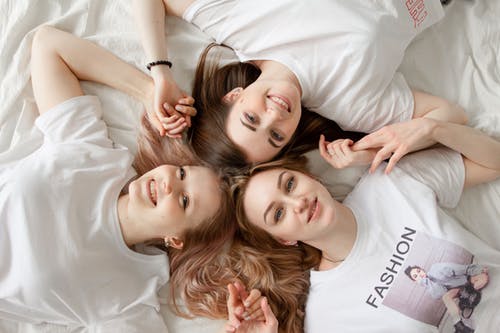 By Kimberly Monaghan on August 26, 2019 in Positivity & Confidence

G to the O, Go Team! Go! Oh I so badly wanted to play a team sport in school. I wanted to walk down the school halls wearing my uniform, feel the highs and the lows of winning and losing as well as share inside jokes and laughter with my fellow teammates. I wanted the glory of making that winning shot and the high five from the coach, the pep talks and the pep rallies. I wanted to ride the team bus to and from the games. I wanted to feel the pain and tears of defeat as much as the rush of victory. I wanted an extended family (my teammates) to lean on in hard times and support me in good times and I wanted to be able to be there for them as well. I wanted to feel like I was needed and therefore belonged to something bigger than myself and my core group of friends.

Well have I ever mentioned how uncoordinated I am?

That’s putting it mildly to say the very least. Team sports are not where my hidden talents lay. My parents did try to give me every opportunity available. I played town soccer, softball and basketball. Soccer I was not terrible at, but once we moved, our new community (a small town in Mississippi) did not have a team. My position in softball was right field. I prayed that the ball never ever came in my direction. If it did, there would be little chance of me actually catching the ball and even less likelihood that I would be able to throw more than a few feet. And if I remember correctly, I was a bench warmer in basketball unless someone was sick. In basketball as you know you have to run and dribble at the same time. That’s worse than walking and chewing gum at the same time. This must have been somewhat disappointing to my mom as she was a gym teacher for over 40 years. Neither my brother or I had hand-eye coordination or athletic skills. Sorry, Mom! I wanted it… I really did.

Fast forward to 2014. I have three kids of my own now ages 13, 11 and 8 years old each with different athletic abilities and desires. However, it’s my eldest daughter that I relate to the most. She is a girl that may be her father’s “mini me,” but is definitely cut from my cloth. We both lack hand-eye coordination needed in many team sports, but both deeply desire that feeling of belonging. She not only lacked the hand-eye coordination but was diagnosed at age three with dyspraxia, a learning disability that affects gross and fine motor skills, and speech apraxia. The therapists had recommended horseback riding to help improve her gross motor skills and build her core muscles and give her physical activity.

That fall my daughter asked me if she could take a break from horseback riding as it was constantly interfering with her inter-county soccer team. And the rule at the time was that horseback riding took precedence over soccer as it was recommended by her therapists, very expensive, hard to get into the stable and quite frankly everyone in the family had already sacrificed other activities and so much time (the stables were a half hour away) for her to follow her passion. My initial reaction was “no.” No… because horseback was a sport that she was good at. No… because we had invested so much money in riding. No… because it meant we would need to find a new stable. No… because her position on the soccer team was “sub.” However, “no” was not my answer. I said, “yes.” “Yes” because I know how important it is for her own self esteem to feel part of a team. Yes… because I know that there are valuable lessons and responsibilities that one learns from being a team player. And Yes… because the pure joy she finds in the comradery and friendship of her teammates.

We were elated. Her self-confidence soared! She was the hero.

Her teammates picked her up and her coach that knew she struggled just beamed with pride. He was not an easy coach. He worked those girls hard and yelled loudly and frequently. Many of the girls left the team years earlier, but the core stayed (my daughter being one). They worked hard. He worked them hard. He was not a coach for the squeamish so his pride was worth gold.

Team spirit builds so much more than just athletes.

As an adult, I found a local women’s soccer team about four years ago. Many of the teammates have come and gone, but the core remains the same. The level of skills varies, but the feeling of belonging to the team is unbeatable! Though I am still not the best player or even close, my own skills have improved significantly over the years as well as my confidence. The confidence alone is a game changer not just in soccer, but throughout one’s life.

So, I leave you with this: It’s never too late to join a team, be it through school or town, just for fun or leisure or not even sports related. Even if you are a busy career professional, participating in a team sport at work or outside of work will do wonders for your self confidence, not to mention having a fun and awesome workout.

Go out and create some team spirit. #dontbackdown

Lori Sternberg, NASM CPT, FNS & PN1 ACE Group Ex, is a certified personal trainer and nutritional coach. She has worked with both corporate and private clients and creates individual programs specific to her client’s needs.

The Alchemy of a Fresh Outlook
Mindful Coaching 101